Why I hate the metric system and you should too: an uninformed rant based on no research whatsoever

Honestly, I probably wouldn’t hate the metric system if I saw it in isolation.  Yes, it’s a little bit silly, like the tennis scoring system, but it’s just a system of measurement after all.

It’s the fucking proponents of it I can’t stand.  More specifically, it’s the self-righteous more-sciencey-than-thou “educators” who will voxplain how it’s sooo superior and anyone who doesn’t recognize this is an inbred Luddite.  Before there were vegans, before there was crossfit, there were metric proponents. And even they wouldn’t be so bad if their arguments weren’t completely, absolutely, 100% full of shit.

First of all, what does that even mean?  Seriously, what?  The closest thing I’ve found to an answer is that “it’s used by more scientists.”  Which is like saying Nathan’s hotdogs are “more medical.”

Holy fuckballs no.  Not even.  Prior to the modern metric system, there was an idea to make a “natural” system wherein the unit of length would be the length of a pendulum with a period of 1 second.  This… is actually a pretty good idea.  And pretty close to a system based on natural laws.  Yes, there is still some arbitrariness involved with choosing the place where the standard will be set since gravity is inhomogeneous, but for the 18th century, pretty good.  This is not what we got.  What we got was a second set of arbitrary units with the pretense of objectivity.  To go into detail relates directly to the objections to:

Just stop.  Let’s talk about this “consistent system” for a while, shall we?   The meter, what is it?  “It’s 1/10,000th the distance from the pole to the equator.”  No, it’s not, shut up.  First of all, everything in this “consistent” system is based on factors of 1000.  Except for this, the principal unit of the system, which is mysteriously based on a factor of 10,000.  But of course it isn’t even that since it’s not 1/10,000th of anything, it’s 1/10,000th of a quarter of something.  So it’s really 1/40,000th of something.   What the meter is, is a juggling around with numbers until they could find a unit of measurement that is as close as possible to a yard, and then making a physical, constantly-changing arbitrary standard based on that.  If they weren’t trying to duplicate the yard, they would have made the meter based on some factor of 1000.  If they were determined to use the earth, they could have taken 1/1,000,000th of the circumference of the earth and gotten a serviceable unit of about an inch and a half, or 1/1000th the radius of the earth and gotten something close to 4 miles, but those units are just too weird and exotic and we need to make this change easy for the peasants to digest while we’re force-feeding this change to them and we really need to sharpen the guillotine again and… sorry, I was getting too deep into the revolutionary mindset for a minute there.  Anyway, a meter is a Froggy yard and I don’t care what anyone says they‘re just trying to post-hoc rationalize it.  Now moving on in our “self-consistent” system, we have the base unit of mass, the kilogram.  Does anyone else see the problem here?    We have a base unit… that requires a prefix.  Qu’est-ce que c’est le face-palm en francais?  And again, this base unit which is supposedly (but isn’t – it’s actually a terrible waste of platinum) the mass of a liter of water, which is a cubic decimeter.  A cubic decimeter of water… which is a liter… weighs a kilogram.  I’m so glad this system is so self-consistent.  And the most ludicrous thing about this inconsistency is that these last two are that they are derived units in the first place!  If they were self-consistent, and they kept with water, their base unit of volume would be about 264 gallons and the base unit of mass would be a long ton.  Which is simply inconvenient and puts to lie…

Here’s the speed of light as George Washington would have reckoned it:

Easy to recognize, and it’s in miles/second because that’s really the only sensible combination of units to use for speeds like that.

Or is it?  Do I have the right number of zeroes there?  And what units?  I mean km/s would be the analog to mi/s, but since one of the purported advantages to metric is adding and dropping prefixes willy-nilly, they could be anything.  Usually, I see the speed of light given in m/s, but I can toss a random number of zeroes and still be correct as long as I claim to be using a particular prefix-unit combination.  To be fair, there are instances where the metric system is easier to use.  Those instances are when you are:

-with a pencil and paper

But other than that, nope.  And part of that is because the Top Men promoting the system are promising completely contradictory things.  To claim that you can create a system of measurement based on natural laws that is convenient for humans is that quotidian mix of ignorance and arrogance that has categorized progressive thought since time immemorial.  Repeat after me:  Nature hates you and wants you to die.  Nature is supremely unconcerned about being convenient.  By picking one unit to be human-scaled (the meter) they pretty much guaranteed that any of the other measurable aspects of nature are going to be stupidly awkward when expressed in terms of that unit.  When was the last time you bought a capacitator measured in a whole number of Farads?  A magnet in Teslas?  (People who buy NMRs don’t count.)  If you want to quantify exactly how terrible of an idea it is to try and build a measurement system around the fundamental properties of the universe, take a looky here. 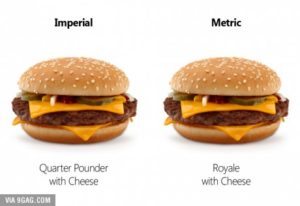 So what is the metric system if none of those myths?  It’s the product of a decimal fetishist.  Which is frankly a pretty low grade of fetish.  It’s like being preferentially attracted to Americans while you’re vacationing in Prague.  Prague, Czech Republic, not Prague, Oklahoma.  They’re not even pronounced the same.  The metric system was made by shallow-thinking revolutionaries who thought themselves wise.  For them, the decimal system had totemic value, like black guns or Maggie McNeil’s “sex rays.”  Their cook could understand halves and thirds, and quarters, but it took a man of the proper social class to understand 3/10ths.  All the good things about the metric system happen because it’s tied to the decimal system.  Which is also its biggest problem, because the decimal system is pretty crap.  But in one of the most unfortunate examples of existence bias in history, Messrs. Haut-Hommes never considered that maybe the decimal system was what they needed to take forth on the tumbrel.

We already have the basis of the dozenal system in our language (dozen, gross, great gross) and Glibs of a certain age may remember when multiplication tables ran up to 12.  Those of you with rugrats can let me know if this is still a thing, but freaking muppets were able to recognize the superiority of the dozenal system.  Even metric-loving Eurotards are starting to clue in; though the specific example in that video is also chock-full of existence bias.  Yes, you could keep Arabic numerals and add a couple of symbols, but it really would be better to replace all of the numerals so it would be obvious what system was being written.  That’s a system that would have been an improvement over an older one.  It’s not what the metric system was.   The metric system was a waste of a good opportunity for a bunch of hubristic murderous progressives (but I repeat myself) to make a positive change but couldn’t because they were stupid (but I repeat myself yet again).

Nothing big this week, so you get a bunch of links. You will read these links and you will comment…

The several thousand people who showed up to watch the Rams-49ers, and the hundreds that watched from home got a…