Broken Bones are the Price We Pay for Being Libertarians

It’s been a full year since Donald Trump was elected by Russian hackers to be President of the United States. As the country has plunged headlong into the darkest time anyone who’s never read a history book can imagine, being to the right of a ‘center’ that to the #resistance drifts inexorably leftward has become increasingly dangerous. Punching Nazis, white supremacists, and anyone who disagrees with Karl Marx has become in vogue, as has shooting at Republicans, and lately, one more person to the right of Lenin has been sent to the hospital. Rand Paul was attacked by an irate neighbor, suffering broken ribs and bruised lungs. Major news outlets will tell you this involved some sort of long-standing personal matter between the two neighbors that had nothing to do with their differing political viewpoints. The neighbor’s lawyer has made similar assertions in an attempt to protect his client from likely harsher charges. Fortunately for seekers of truth, Elie Mystal, the Executive Editor of the website Above the Law, has sussed out the real culprit: Libertarianism itself.

In his piece Libertarian Hero Meets The Justice Of The Streets (Err.. Suburbs), Mystal engages in victim blaming so obvious that he himself admits to doing so towards the end of his piece. He shrugs his self-acknowledged hypocrisy off because in his view the natural, inevitable outcome of a libertarian society is that people will physically attack each other over matters their lawyers will later describe as ‘trivial,’ because there will be no other options for people to settle disputes. The ignorance of libertarian thought he displays throughout his article is as garish as a neighboring barn painted hot pink accented with neon green lightning bolts; It’s ugly to look at, and one wonders what the person who created it was thinking, or even if they were in their right mind to begin with.

Mystal describes the atrocities Paul was allegedly committing that would, were it not for the benevolent hand of laws that would mysteriously be absent in Libertopia, naturally cause one to resort to physical violence to solve. Rand Paul allegedly grew pumpkins on his property, you see, and sometimes pumpkins smell bad. He also perhaps liked to compost on his property, which can also (if not properly done) become noticeably malodorous. And if that weren’t enough to drive perfectly normal people into fits of violent rage, there may have been lawn clippings where Paul’s neighbor thought they shouldn’t be. In Mystal’s view, the only available options someone living in Libertopia would have is to either move away or start cracking ribs. Libertarianism just leaves people with no other options, he presumes. 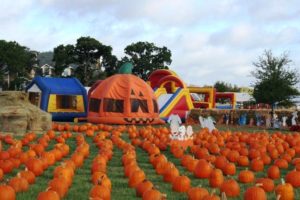 Anyone with even a passing familiarity with anything other than the grossest stereotypes of libertarian thought knows this to be false. Paul’s home, and his neighbor’s are part of a Home Owner’s Association, which would certainly still be permitted to exist in Libertopia. Home Owners’ Associations represent a great example of an entirely voluntary exercise in collectivism. People who buy or inherit a house in an HOA know of its existence before moving in. But if you’re in the market for a house but don’t want to be in an HOA, you do research and avoid looking at homes under an HOA. If you inherit a house in an HOA and you don’t want to be part of it, you sell the house to someone who doesn’t mind being in one. The formation, operation, and dissolution of HOAs are a valid exercise in the freedoms libertarians recognize.

This particular libertarian lives in a condominium and is the president of the association. HOAs and condo associations have rules that owners are expected to abide by, but the association cannot force compliance. What associations can do is levy fines for noncompliance until the property is no longer violating established association rules. If the problem persists and fines left unpaid, the association can, through the court system, place a lien on the offending owner’s property until such time as outstanding fines are paid up. This is something that happens pretty regularly depending on how bad an owner is regarding paying their dues to the association. The association also has some discretion in when fines should or should not be assessed, and that is laid out in rules that every owner has the right to peruse at any time. By contrast, an association representative cannot, for example, force entry into a unit to confiscate an unapproved decoration on the owner’s balcony. The association cannot call the police to have them do it unless the owner or occupant is violating the law in some way–for example, if someone is cooking outside on a grill too close to the building, the association can call the police because it violates a city ordinance. If a dispute cannot be resolved this way, owners and the association can take each other to court and have the court render judgments. But if a unit owner simply pays the assessed fines along with regular fees, the association cannot do anything further concerning rules violations unless laws or ordinances are also being violated.

My condo is on the second floor of a two-story building, with windows facing east and south. It tends to trap heat, which is great in the winter, but awful in the summer. Each unit has a permanent wall mount for a window-mounted air conditioner in the living room, but nothing in the two bedrooms. The layout of the unit makes having a cross-breeze all but impossible. So in the summer months, my unit is often hotter on the inside than it is on the outside.

I have tried to solve that by buying the most powerful A/C I could find that will fit in the wall mount, buying sun-blocking drapes for the windows, and having double-paned windows and a triple-paned glass sliding door. The sliding door did not come in an exterior color approved by the association, but I wanted triple-paned so I painted it myself after installation. I have literally spent thousands of dollars trying to fix this problem in a way that doesn’t run afoul of association rules. The problem is better, but no one who comes by in the summer thinks it’s been solved.

So I purchased a portable AC that goes up in a window. This is a violation of association rules; because they strive for the exteriors of the units to be consistent and fairly uniform, they prohibit hanging air conditioners in windows. My air conditioner is of the type that sits on the floor, with a penal for the exhaust that hangs in the window. I’ve been open with the Board of Directors about having the unit there when it’s hot. They have the option to fine me for noncompliance, and I’ve told them that I value my health and the health and comfort of my guests over the monthly fine. I wouldn’t complain or abuse my power as president to avoid paying the fine if the BoD decided to assess it, but in four or five years it hasn’t even come up. I’m aware that this may not be the norm for HOAs, as they tend to attract the sort of petty tyrant who couldn’t be elected in a one-person race, but that’s not my point.

My point is that, unlike the presumption espoused by Mystal, Paul’s neighbor had a recourse other than blind-side tackling someone who doesn’t follow HOA rules, and that recourse would have existed in Libertopia. If Paul’s neighbor has addressed his grievances to the association directors, their legal option was to assess Paul fines based on noncompliance. If Paul is paying those fines, and assuming he is breaking no local laws, there’s nothing more the association can do, and neither is there anything Paul’s neighbor can do. In this case, Paul would be complying with association rules by paying fines as directed for noncompliance. The neighbor’s next option is to see if Paul were violating any local ordinances and pursue matters with the local authorities. Those ordinances may or may not have existed under Libertopia, but the court system involved would remain.

Mystal really needs to do a bit more research into libertarianism.

I just saw the trailer for the latest Avengers flick, and at one point there are two giant armies running…

Any Bulls fans out there? What's up with your boy Ben Gordon? Dude needs some meds, pronto! Eli Manning is about to take…