*Yells into other room*

Oi! Make me a Sandwich!

Dammit, I live alone. I have to do it myself. Welp, I guess I’m going to talk the Glibertariat through a process again. Let’s see, do we have any bread…

I guess that’s where we have to start.

We need some ingredients. What are they?

Before we forget, lets make sure the oven is empty, then set it to 350 degrees. That’s Fahrenheit for anyone from a country that measures based on water rather than humans. If you don’t want to do the math that’s 1.77 times the boiling point of water.

Let’s just toss the flour, salt, baking powder and garlic in the mixing bowl. There’s no special magic this early on in the process. We need to grate the cheese before adding it, or it won’t integrate too well. After that, it should look something like this: 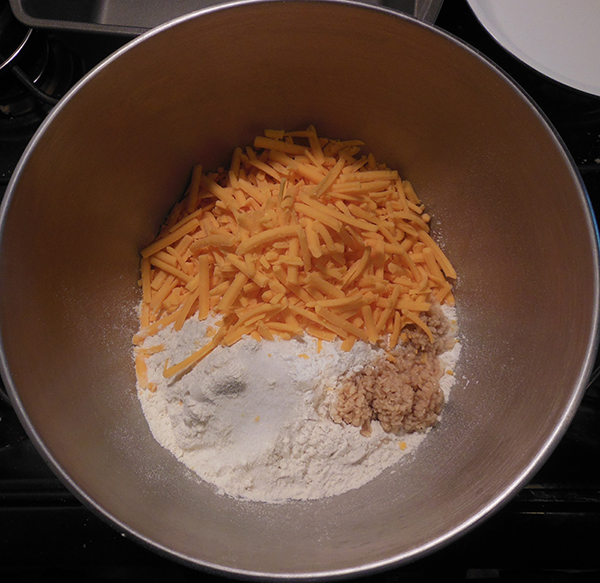 Simple enough, now we mix those together. I have a stand mixer with a dough hook, but that really is overkill. We’re not going to knead the dough, the only reason I like the dough hook for this process is that it’s easier to clean in the end, and it still gets the job done. Now we have – mixed powdery substances in a bowl with some cheesy bits.

Time to add the beer.

Now Glibs have been known to have massive debates on the topic of beer, so I’m not going to bother telling you what you should pick. If you don’t have a preference, grab a basic American Lager, the cooking and the other ingredients will cover the flavor.

With the beer added, we mix until we get a fully integrated dough. It will be a wet dough and will cling to pretty much anything. We need a loaf pan either greased with butter, coated with oil, or spritzed with cooking spray, anything suitable as a release agent that you’re willing to ingest. Get the dough in said loaf pan and relatively evenly distributed. I find hands to be the best implment for doing this, but don’t want to interrupt the cooking to wash the dough remnants off again. So I keep a box of disposable gloves in the kitchen for just this sort of thing. 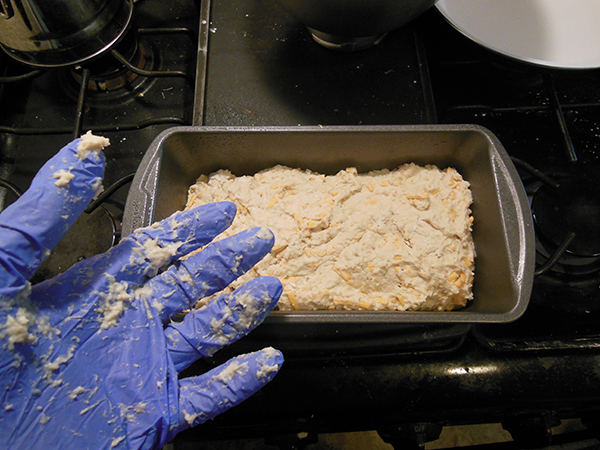 We still have that tablespoon of butter. Melt it and get it across the top of the dough, either drizzle it, or brush it, or some combination of the two. Usually I melt it in the microwave because it’s fast and I’m lazy. Here, if you have extra cheese from the first grating, you can sprinkle it on the top. This produces an excellent effect when baked. Alas, I did not have sufficient cheese.

Drop the loaf pan into the oven at about the middle of the space and set a timer for forty-five minutes. While we wait, we have to resist wandering off for a little bit. A proper sandwich deserves accompaniment. Lets put together some classic tomato soup.

I haven’t got any of the canned stuff, so we’re making this from scratch too. We’ll need ingredients. Where are my handy bullet points?

We need to get rid of the onion skin and chop it into small pieces. Mostly because it would look silly to drop a whole onion in the pot. Cans of crushed tomato come in twenty-eight ounce sizes, so this is one such can. If you want to go through the trouble of processing your own, go right ahead. I’m in a bit of a hurry. Same thing with the stock. I used pre-made chicken stock because I had it.

All right, time to get cooking. Find our trusty dutch oven and make sure it’s been washed since the fish stew incident. Put it on medium heat and melt the half stick of butter. Once that is more or less liquid, add the other ingredients. If you need to know what it might look like, here’s an example: 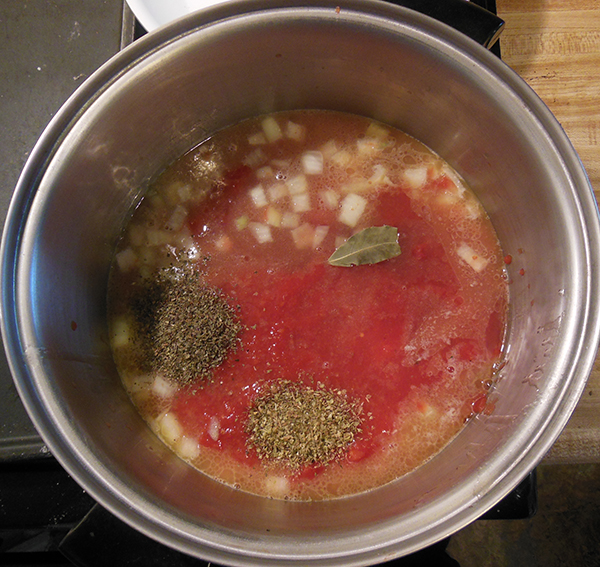 Stir it up and bring to a simmer. Let it continue to simmer until the bread timer has gone off. That should be give or take forty minutes after it went on. It would be advisable to give it a stir every so often to make sure nothing is sticking to the bottom of the pan. If it does, take the edge off the heat some and give it the occasional stir. Do not cover the pan. We want it to boil off some of the excess liquid. After it’s been cooking for a while, it will start to look a bit like real soup: 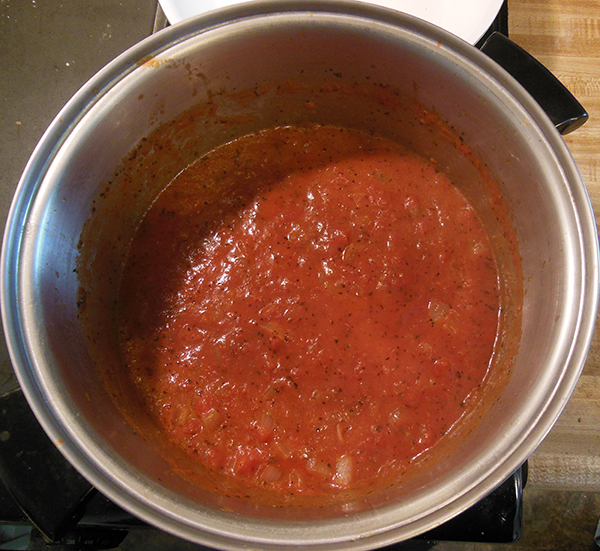 Find the bay leaf and toss it. You don’t want to eat that now that it’s done its part. Now, the soup is perfectly edible as-is, but if you want to have consistancy closer to the canned variety, find a blender. Me? I just moved the pan to another burner and put a lid on it. My bread was done.

Well, the bread fresh from the oven was too hot to slice. And since I didn’t have the extra cheese, looked a little pale. See: 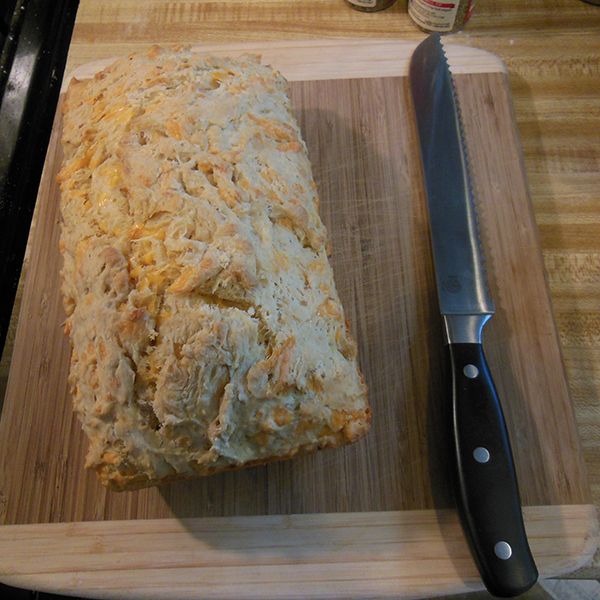 But, once it cooled down, we could get on to the business at hand from an hour ago – making sandwiches. If you hadn’t guessed already from the tomato soup, I’m making grilled ham and cheese. Okay, the grilled cheese was probably obvious, the ham part is pretty common, too.

The best way to distribute butter for grilling sandwiches is about as contentious as the appropriate type of beer to cook with. You do what makes you happy. I’m going to butter the bread so that the second side is guaranteed a dose of butter equal to the first. Then we start our construction. On the unbuttered side, we lay out a slice of American cheese (It’s traditional, any melting cheese will work). Then some cubes of ham. I stopped here to take a picture because the next step would be another layer of cheese, then the second slice of bread. 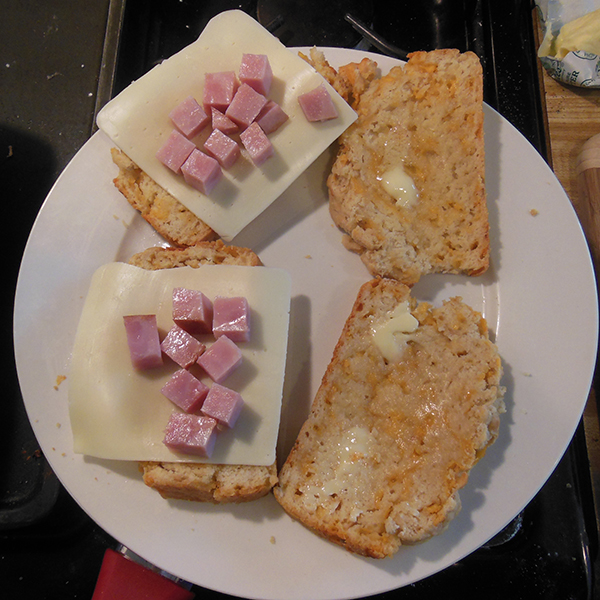 Okay, so the bread was still a bit warm when I sliced it.

Find a skillet or frying pan, or griddle, or whatever relatively flat bottomed, low-walled (or no-walled) cooking surface you want to use. Put it on medium heat and wait until you can feel the radiant heat a few inches above the pan. Gently lay the assembled sandwiches in.

Here’s the hard part – we wait.

We need the heat to brown the lower surface and conduct up into the cheese to turn it molten. This will inevitably take longer than I expect, leading to me standing there in irritation as thermodynamics thumbs its nose at me again. But once we do have it, we flip it over and… 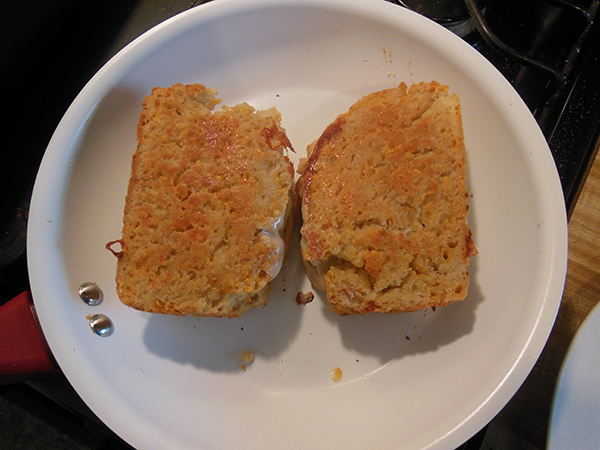 Browned on one side.

Yes it is Browned! I know it doesn’t look it in the picture, that’s because it’s a low-contrast to the color of the bread. Take my word for it, it’s browned, and the cheese melted. We also have to wait for the same thing to happen to the other side. This is usually even more frustrating than the first wait, after all it’s been more than an hour since I yelled for an empty kitchen to make me a sandwich, and it’s still not quite done. But, once it is browned, we cut it on a bias (conservative in my case), array it on a plate and ladle out a bowl of our herb-laden tomato soup. 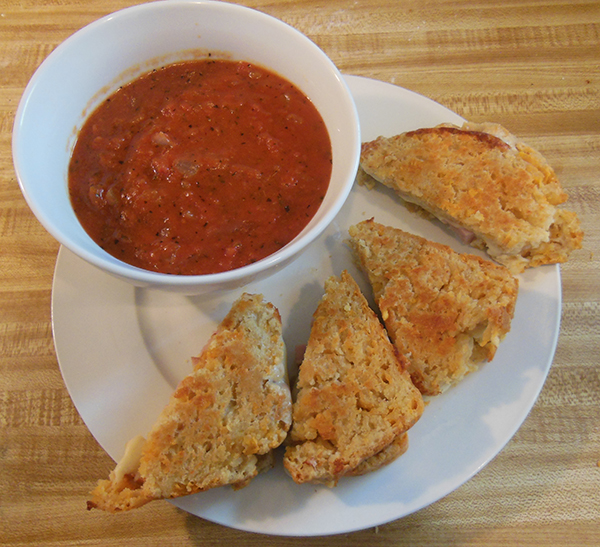 I need to get me a sandwich-making person.

It looks like Negroni and his wife, our reptilian overlord Mr. Lizard and I will be meeting at Mr. Dunderbak's…

Well half of the headlines on every sports website are about political posturing bullshit. And that's even with a freaking…