The 2017 Oktoberfest will start in Munich, Bavaria, Germany on the 16th of September at noon Central European Time and will run until the 3rd of October. It is the world’s largest beer festival with roughly six million attendees annually, but it is more than just beer. There is food, carnival rides, and shooting competitions.

There are other Oktoberfest celebrations around the world. The Munich Oktoberfest is the oldest, largest, and the subject of this article.

I went to Oktoberfest in 2016. It was not my first time in Munich, but it was my first time at Oktoberfest. Unfortunately, I missed the shooting competitions, but I drank, ate, and enjoyed myself.

First, a little mood music from the Rockaholix Buam where they sing about Bavaria in the Bavarian dialect to the tune of an Irish drinking song while driving around the Bavarian countryside in an American made pick-up truck flying a pirate flag and flags with the Bavarian coat of arms.

To summarize the Oktoberfest Wikipedia article, the first Oktoberfest was held in front of the Munich city gates on October 12th, 1810. It celebrated the marriage of Crown Prince Ludwig of Bavaria to Princess Therese of Saxe-Hildburghausen. The location was named Theresienwiese (Theresa’s Meadow) and is commonly known today as Wiesn. The celebration included horse races, food, and drink. The celebration turned into an annual event. As the event grew and became more popular, the festival moved to September to take advantage of better weather. With only a few exceptions due to war and epidemics, the festival has been an annual tradition. This year’s Oktoberfest is the 184th Oktoberfest.

The modern day Oktoberfest starts in September and runs until either the first weekend in October or German Unity Day (October 3rd) if the first Sunday in October is either the 1st or the 2nd. The festival lasts 16 to 18 days.

The only beers served are beers brewed in Munich that comply with the Rheinheitsgebot. Currently, the brewers who meet those criteria are Augustiner (the locals’ favorite), Paulaner, Spaten, Hacker-Pschorr, Löwenbräu, and Hofbräu.

The tents have food available. Each tent has its own menu. A few examples of the variety of food: 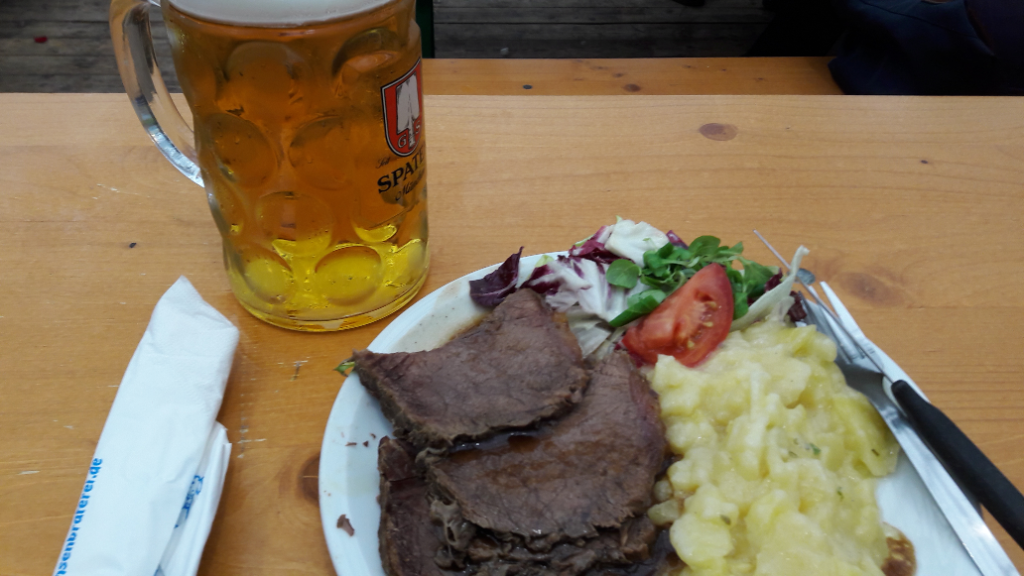 The atmosphere is different in each tent. Locals like the Augustiner-Festhalle. Hofbräu Festzelt is popular with American, Australian, and New Zealander tourists. Bräurosl hosts a gay and lesbian party on the first Sunday of the festival, see Rosa Wiesn, in German only, for more information.

There are also a wide variety of carnival rides and games. The Teufelsrad seems to be rather popular. The goal is to stay on a wheel spinning with increasing speed while the staff try to knock you off the wheel.

Before we talk about the shooting competitions at Oktoberfest, let’s talk a little about guns, shooting clubs, and shooting festivals in Germany.

This paper from the Library of Congress has one of the best English language summaries of German gun laws I’ve seen. Germany is not a good place to be a gun owner. This article says the current system traces its roots to 1928. The current system mandates separate licenses for acquiring, possessing, or carrying a firearm. Obtaining a license is not easy. There are storage requirements for firearms. Except for the national registry of firearms, current legislation is implemented by the German states even though the legislation is federal.

According to the registry, there are about 5.5 million legal privately owned firearms in Germany and about 1.4 million legal gun owners. In 2013, Der Spiegel published an analysis of the registry breaking down gun ownership by state. Bavaria has the most registered firearms (1.1 million) but only comes in second on a per capita basis (9.2 per 100 residents). Rhineland-Palatinate has the highest per capita rate of gun ownership (9.7 per 100 residents).

There are shooting clubs all over Germany. Many are affiliated with the Deutscher Schützenbund (DSB). The DSB was established in 1861 and reestablished in 1951. The DSB has regional organizations, and clubs are under the regional organizations. Total membership is about 1.4 million. Their English language website is here. Their website has historical information about German shooting clubs from their start until to the Second World War; however, almost all of the history is in German. With some help from Google translate as my German is not good enough to read all the historical information, I will summarize.

German shooting clubs trace their roots to Medieval times. German towns were defended by militia companies armed with crossbows. Over time the companies took on a broader view of protection and defense, and started acting as mutual aid societies. Their practices grew into social events, which over time turned into modern Schützenfests (shooting festivals).

As European armies switched over to firearms, the shooting clubs switched as well. The shooting festivals and clubs began receiving municipal funds. Winning competitions became quite prestigious. In the 17th and 18th centuries, the reliance on shooting clubs for defense declined; however, the clubs’ and festivals’ existence continued. In the mid-19th century, clubs in Gotha, Frankfurt am Main, and Bremen worked on centralizing and standardizing clubs. This work culminated in the founding of the DSB in 1861.

In the late 19th century, with the rise of the German Empire, the DSB declined again. The reason is that competition shooting with military arms grew. The DSB did not allow use of these arms as they wanted to stay apolitical. The DSB stayed apolitical until the rise of the Nazis, whom they initially supported in hopes the Nazis would end the internal disputes and disunity of Germany. On the other hand, the Nazis did not like the DSB and tried to shut it down. The DSB could not show a clear Germanic origin for traditions like shooting birds, and the DSB did not want Nazi paraphernalia at their shooting ranges.

Schützenfests continue today and have spread throughout the world. The oldest in America is in Cincinnati, Ohio. Australia has one near Adelaide, South Australia.

Germany has many, and hosts the largest in the world, which takes places annually in late June to early July in Hanover, Lower Saxony. The 2018 Schützenfest runs from Jun 29th through July 8th. The Hanover Schützenfest opens with a parade of shooters from all over the world, though I’ve read that not all take part in the shooting. According to the festival’s website, in 2017 12,000 shooters took part in the parade. The website says there were 148 million attendees, but based on other sources I think that is a typo. 1.48 million attendees in 2017 is probably the correct number. The festival includes beer tents and carnival rides.

Oktoberfest is not a Schützenfest, it is a folk and beer festival. However, there are some elements of the shooting festivals at Oktoberfest and it has two shooting competitions. One competition involves air pistols and air rifles. The other uses crossbows.

The first Sunday of the festival, there is a parade of rifleman. After the parade, the shooting competitions may begin. At the end of Oktoberfest, there is a ceremony at the Bavaria statue near the Schützenfestzelt to recognize the Landesschützenkönige (loosely translated as the shooting champion). 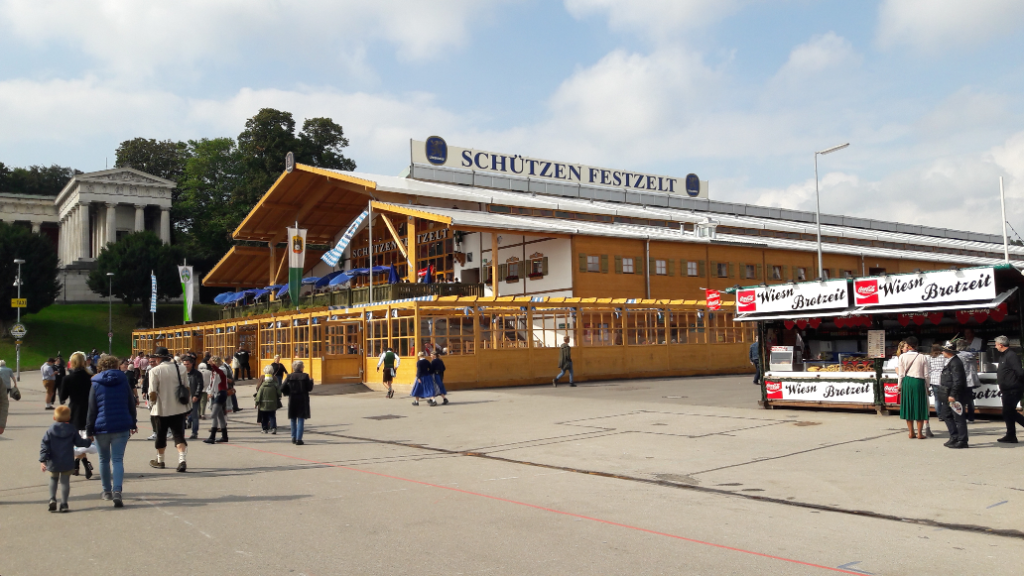 The rifle competition is held at the Schützenfestzelt (Shooter’s Party Tent, website here). The competition is run by the Bayerischer Sportschützenbund e.V. (Bavarian Sport Shooting Association, BSSB, German only website). The competition uses air guns at a distance of 10 meters (roughly 11 yards). There are 110 shooting stands in the Schützenfestzelt. I have not been inside the Schützenfestzelt, but supposedly it is possible to watch the shooting. The BSSB’s website says the general public, aged 12 and older, is allowed to take part in the competition; however, only members of the BSSB are eligible to be Landesschützenkönig. The shooting hours are 8 AM through 5 PM on the Saturdays and Sundays of the festival, except the last Sunday when shooting stops at 2:30 PM. Weekdays shooting is on Wednesday, Thursday, and Friday between 10 AM and 5 PM. Entry fee for air rifle shooting is 18.50 Euros for adults and 7.50 Euros for students and children. Entry fee for air pistols is 12.50 Euros for adults and 5.50 Euros for students and children. There is prize money available, from tens of Euros to low hundreds of Euros. 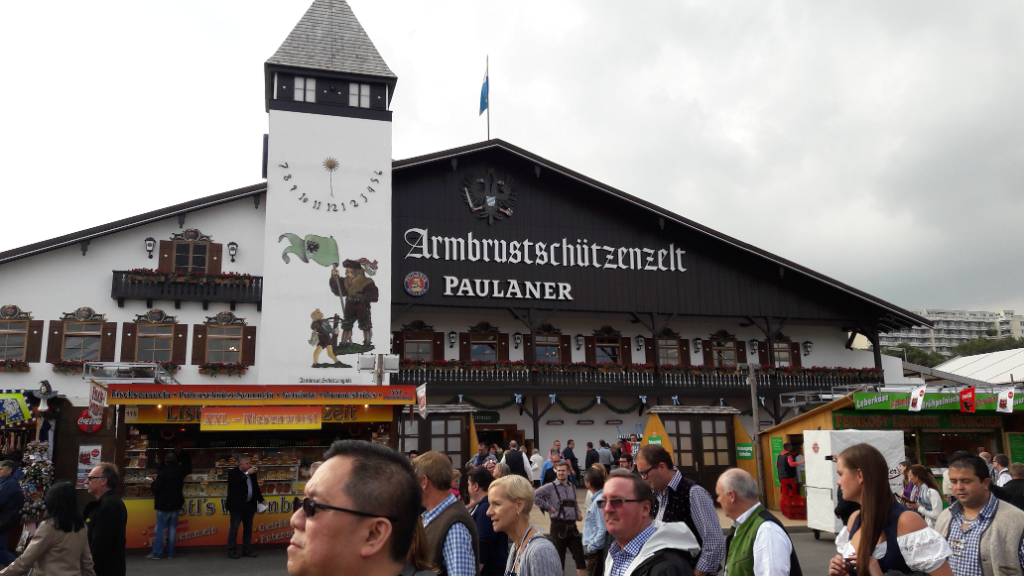 • The Munich City government has imposed restrictions on AirBNB like services, so be careful if you go this route. Don’t be the person that gets your host in trouble.

• Munich locals agreed with me when I told them my plans: Skip the weekends and go to Oktoberfest during the week. The weekends are too crowded and it is too difficult to get into a tent. If you do go on the weekend, expect the tents to fill up in the early afternoon. The weekdays are much quieter and the tents fill up in evening instead of early afternoon. Note that some tents have family days during the week where families get discounts; however, anyone is welcome in the tent.

• I’ve heard that some tents accept credit cards, but I didn’t see any acceptance of credit cards when I was there. Expect Oktoberfest to be strictly cash-only, and pay as you go.

• It’s OK to stand or dance on the benches, but keep your feet off the tables.

• You can reserve tables in the tents, but only for large groups (usually eight or more people). Reservations fill up early, so like with hotels, reserve early. If a table isn’t reserved and isn’t full, ask if you can join. Most locals will gladly let you join them if there is room for your party. In almost every tent, you won’t be served unless you are seated.

• I didn’t get a car while I was there. I relied on public transit. German public transit is good. The Münchner Verkehrs-und Tarifverbund (MVV, Munich’s public transit system) English language website includes schedules, maps, fare information, and trip planners. There is an U-bahn (subway) station at the Wiesn for the U4 and U5 lines, which is sometimes closed during Oktoberfest due to security concerns. The Hauptbahnhof (Main Train Station) is a fifteen minute or so walk from the Wiesn. All S-bahn lines except the S20 go through the Hauptbahnhof. The S1 and S8 go to the airport. To go from the Hauptbahnhof to the Wiesn, follow the signs. There are signs at the Wiesn which will direct you to both the U-bahn station and the Hauptbahnhof.

• Due to increased security, you won’t be allowed to take large bags into the Wiesn. The Wiesn is now fenced off, and you can only enter and exit at certain points.

• Don’t drink too much unless you want to end up on the Munich Barfs web page or in Youtube videos like this one.

If you go, I hope you have a good time. Oktoberfest is a lot of fun.

I’m a straight guy, so I am a bit clueless about what those that like looking at men are attracted to, but I think the pictures I found of men in Lederhosen won’t work. Instead, have a video of Bavarian Stone Lifting, which does not take place at Oktoberfest.

Enjoy this gallery of women at Oktoberfest.

Editor’s Note: DEG is already deep into the spirit of Oktoberfest, so to speak, so he’ll check in for comments, questions, and general applause on Monday.

ZARDOZ SPEAKS TO YOU, HIS CHOSEN ONES. IT HAS BEEN GOOD FOR ZARDOZ TO GET BACK TO THE BASICS -…

If you ever had Cave Creek Chili beer, you probably agree with the popular opinion that it is dreadful.…