Lets see how the resident Glib who doesn’t like anything cooks. We will be making fish stew. This is an improvised recipe that came out of trying to talk myself out of doing something stupid. More or less my first idea was Fish chili. This didn’t sound like it would turn out right, so I talked myself into something less outlandish. Visiting the local mega grocery (that is more than one mile distant from my food-desert located house), I picked up the following items (okay I already had some near the bottom of the list). I’ll start cooking, and sooner or later you’ll be compelled to follow along. Or I’ll randomly switch to first person plural.

The shrimp I got was pre-cooked. There was a good reason for this – that was the cheapest. There is another good reason – it allowed me to not have to spend too much time cooking the shrimp. So I started out peeling the shimp, the carrots, the potatoes, and the onion. This was a good start, and I followed up by quartering and cleaning the bell pepper. Since I was prepping everything, I carved the perch into two-inch squares. Since it came from Soviet Canukistan, it was still rimed with native frost. 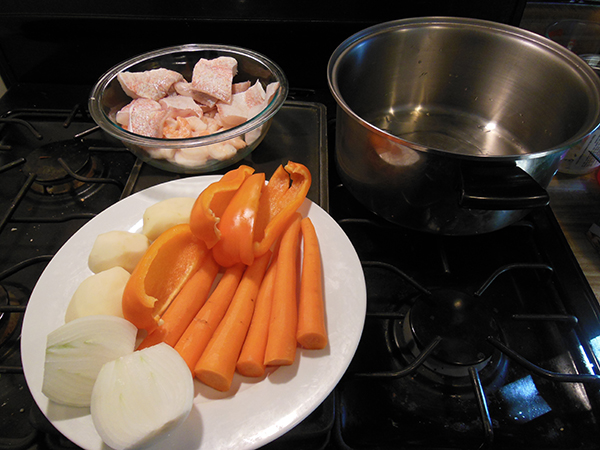 Those veggies were too big for the task, to I chopped them into smaller bits, keeping the aromatic and root vegetables separate. This will make later steps easier. I followed it up by moving the pot into the front and cut the bacon into small pieces. 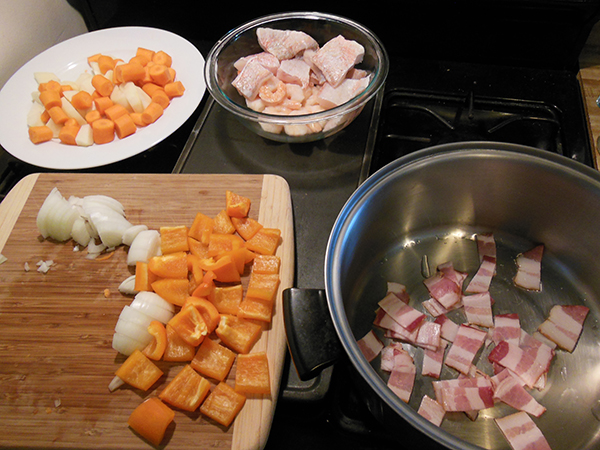 Now, we could do this next step in a frying pan and move it to the dutch oven, we don’t need to. It’s plenty easy to do all of this in one pan. Start the heat and cook the bacon. We want the flavorful grease to be released, and will be using it as our fat for this part. Once the bacon has given off enough grease, it’s time to add our onion and bell peppers. We cook until the onions start to brown, there should be some browning on the bottom of the pan, this is fine. 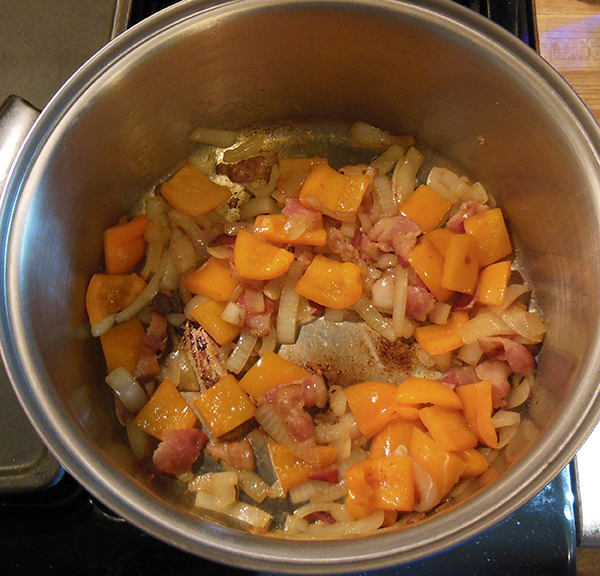 We need to get that tasty material off the bottom of the pan. After all, it’s bacon, onion and peppers, but mostly bacon. We want that in the stew. We could do some fancy deglazing, or we could just use the next ingredient. Pour our can of stewed tomatoes into the pan, liquid included. We’re going to use the acidic liquid from the tomatoes to deglaze the pan and collect that bacony flavor. To make sure we get it all, let’s cover it with a lid and let it simmer for five minutes. 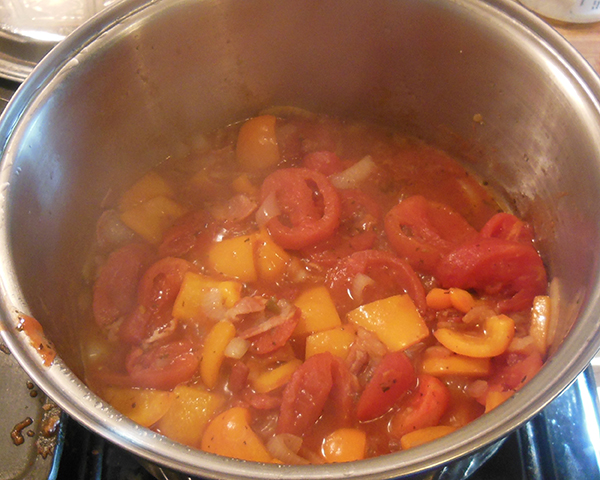 After simmering and deglazing.

All right, we need to start making soup before we can turn it into stew. Lets add the root veggies and three of four cups of the broth. The fourth cup of broth we’re going to reserve for later. This will make sense sooner or later. Some of you might see where this is going. 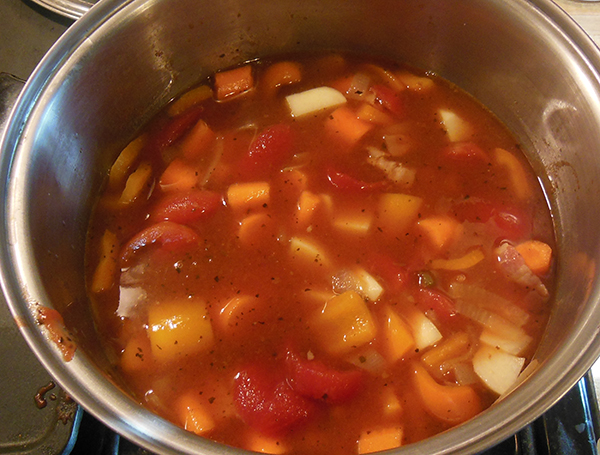 At this point we have to turn off the burner frenetically, move the pot to another, and clean up a catastrophe in the kitchen.

Okay, the catastrophe isn’t required, but I did reach into my cabinet, pick up a box of corn starch and promptly drop it. Worse, the lid wasn’t on all that tight and it went everywhere. Half a second of gravity and my kitchen looked like a party at Tony Montana’s house. So I spent too long cleaning up the wite powdery substance, you may see it in the later photographs, because corn starch is pernicious and stubborn.

Once that diversion has been dealt with, we can re-ignite the burner and put the pot back on the heat. Put it on medium to medium high and set a timer for thirty minutes. Go watch some cat videos on YouTube or something.

After our timer goes off, we want to check the potatoes. They need to be cooked now, or we’ll have problems. So if they’re underdone, let it cook a little longer. The carrots can be a little crispy, that won’t be a problem, they’re just carrots. 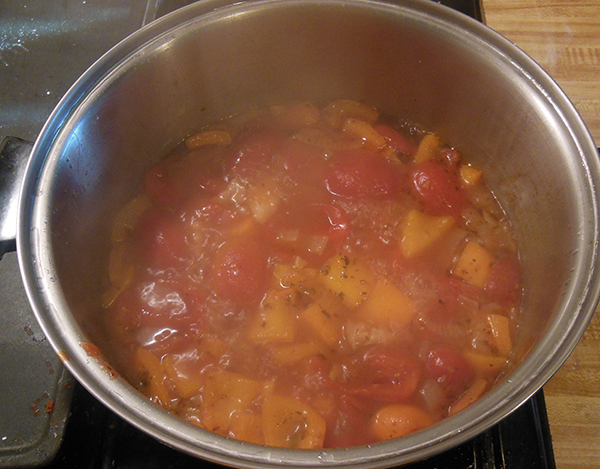 Now the bacon is a nice little bit of protein, but it’s not the primary source for this. So lets toss in our shrimp and the perch. Toss in three teaspoons of curry powder and a liberal helping of black pepper. Mix it all in. The perch will cook quickly. If you have anything resembling a membrane on the fillet, it will curl into nice little tubes while it does so. This is all right. This is also why I’m glad the cooked shrimp was the cheapest, since it allowed this step to go fast. 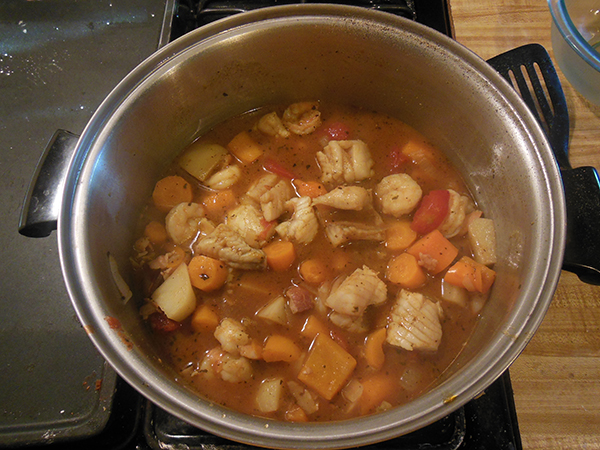 Let’s leave the pot for a while and get a bowl, pour the reserved broth into it and start mixing corn startch in. We want the starch fully integrated and the broth near saturation with corn starch. Once this is done, we pour it into the pot and stir it in until the broth thickens to a gravy. The perch should be fully cooked by now and may start breaking apart while we’re stirring. This is also fine. We’re not trying to serve discrete chunks of fish. 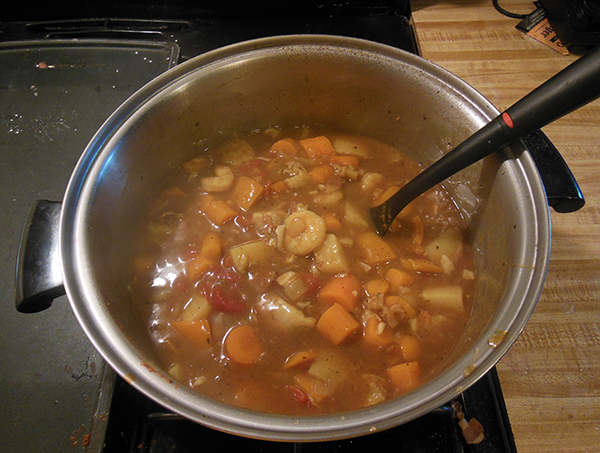 It should be done, we can’t forget to turn off the burner.

We ladle it up into the bowl and … wait a minute… 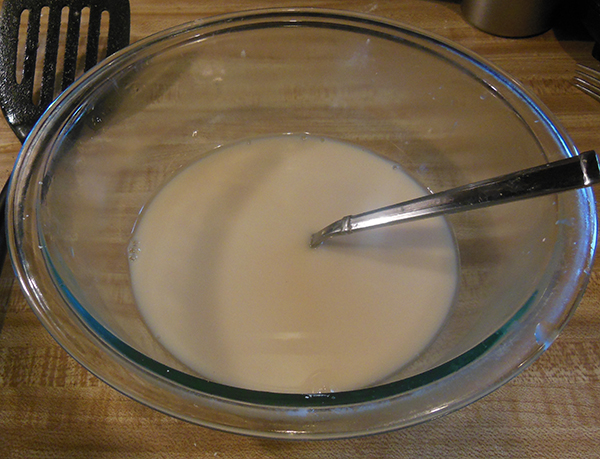 Oh, okay, I just mixed up the order of the photos, that’s the thickener from a few paragraphs back before we poured it into the pot.

Here’s the real bowl. Sorry about the mess: 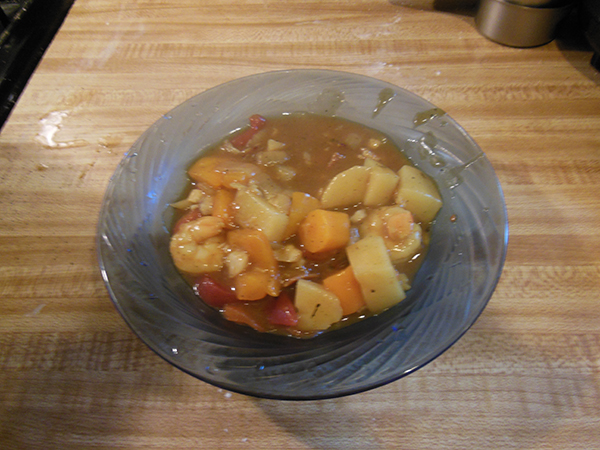 STEVE SMITH IS A VERY HAPPY SASQUATCH TONIGHT- HE SCORED A GIG DOING HIS SECOND LOVE- MUSIC. AND SECOND LOVE…

I'm having a nostalgic moment, thinking about the wonderful Saturday morning cartoon shows when I was a kid. The local…