Why Dreamhost is our host 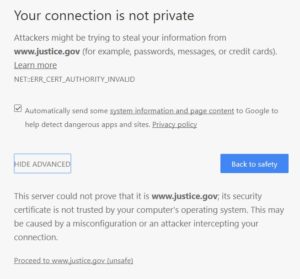 In alarming, but not surprising, news, the Department of Justice is demanding over 1.3 million IP addresses and associated contact information for visitors to a website hosted by Dreamhost, a Los Angeles-based web hosting company. Our web host.

The only surprising aspect of the case is that it is not Glibertarians.com that is targeted. The website in question is disruptj20.org, “a website that organized participants of political protests against the current United States administration,” according to Dreamhost. Not only is the contact and personal information of the site visitors wanted, the DOJ is also pushing for access to photographs of protesters that are on the site’s server, and what content the website visitors viewed.

If you don’t want something coming back to bite you in the ass, don’t put it online in any form. Almost everyone gets this. (Well, maybe not the assorted criminals who are easily apprehended after posting videos of their criminal exploits publicly on Facebook.) This has been a concern for far longer than the current administration has been around, as I am quite sure the Glibertariat is well aware. Hell, the Foreign Intelligence Surveillance Court was established in 1978, and it has been perverted and allowed to be used for nefarious purposes willy-nilly ever since, completely gutting Fourth Amendment protections.

However, web browsing is something that most people do automatically, without thinking too much about the ramifications. Of course, many people routinely block their browsing history from spouses, children, bosses and other people in their daily lives. (Visitors to the Certified Family Friendly website Glibertarians.com should certainly be doing so.) It’s far more difficult to block one’s browsing history from one’s internet service provider, and from the web host of sites one visits.

But back to Dreamhost. Dreamhost has a long history of attempting to protect its users by challenging law enforcement requests for information and legally rejecting them. In 2014, for example, DH was able to legally block 57% of the information requests it received.

I’ve been a Dreamhost customer for a decade, give or take. I use DH for all websites I build and domains I register, no matter who owns the site. One of the first things that sold me on DH was the ability to have one’s domain registrant and contacts protected by DH during a whois search, at a time when most other web hosts and domain registrars simply wouldn’t bother. I was happy to avoid random obnoxious marketers targeting website owners, and the occasional too-ardent admirer.

Since then, I’ve repeatedly seen that Dreamhost makes sincere and real efforts to protect more than my mailing address.

My concern over the gutting of the Bill of Rights by the government has increased steadily since 9/11. That dismantling shows no sign of slowing down. It gives me some tiny measure of comfort that Dreamhost shares that concern.

And THAT is why Dreamhost is our host.

Read more about it:

I'm still super busy. I give you an empty links to play in.