Belly Up to the Bar: Diet Buster Edition

(it brings all the boys to the yard, and then gets them white-girl wasted)

All right so I’m sure we’ve all seen the Big Lebowski and are familiar with a classic White Russian*:

My school newpsaper editorial staff used to get hammered on these the night before copy was due. Someone would bring in a handle of vodka and a gallon of whole milk and we’d shoot for the Ballmer Peak, and aggressively miss. 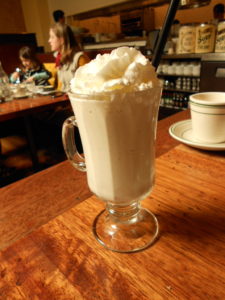 As time passed, I realized that a great opportunity was being missed for maximal fat-assery and I set out to combine the deleterious effects of both alcohol and ice cream in (probably not) new and (definitely) exciting ways.

You will need a decent blender, milkshake/malt mixer or food processor for this to work.

Put your coffee liqueur and vodka in the freezer, buy a vanilla ice cream made from a custard base (eggs should be an ingredient). You want it to be a rich, dense ice cream, but not as rich and dense as Häagen-Dazs. I’ve experimented here so you don’t have to, the frozen vodka keeps the densest ice creams so solid they don’t blend, but isn’t able to keep the cheaper air-beaten stuff–like Dryers/Bryers or heaven forefend a 5 quart pail of generic–thick. I’d recommend Double Rainbow or Trader Joe’s house brand (potentially the same thing).

Exact proportions are for suckers here. Put as much ice cream as you want in your blender, add as much coffee liqueur as you prefer and turn the thing on. Add in enough vodka to achieve a Frostee consistency (with a high fat ice cream and very cold vodka it’s more than you’d expect) and serve.

Start or restart your diet the next day.

Derpetologist’s Spot the Not – Bands with Wacky Names 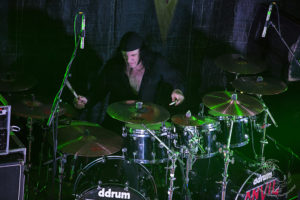 3. Barney Rubble and the Cunt Stubble

6. Gee That’s A Large Beetle I Wonder If It’s Poisonous

ZARDOZ SPEAKS TO YOU, HIS CHOSEN ONES. ZARDOZ HAS SOLVED HIS PLANT MATERIAL NEEDS FOR THE MOMENT. A BALE OF…

Its a big bucket of mixed bag. Kind of depressing really. I wanted to have some fun, but the world…